This analysis of Section One of the 2007 HSC paper is designed to support class studies that relate to developing responses to Section One type questions.

Success in this part of the paper is largely dependent upon your ability to decode or understand the demands of the question and how you use the source material, i.e., citations, plates and quotes etc to support your response.

This breakdown of Section One questions from the 2007 HSC paper is designed to walk you through that process and hopefully, help you better understand what is required of you and demonstrate how you can use the source material to inform / construct a response.

This paper follows the old format of questions 1a, 1b and 1c in the question numbering. The current HSC format for Section One is Q1, Q2 and Q3.

“The Blackstone Tjanpi weavers are a group of Aboriginal women from 23 different indigenous communities in Western Australia. Identify the main characteristics of their artmaking practice as represented in the images below.”

This question asks you to ‘identify’ the main characteristics. Note that this is plural, it doesn’t say how many, but certainly you need to be able to identify more than one. ‘Identify’ in its simplest reading means to name or point out. Collectively, the first clue identified in our lesson on unpacking strategies, was that the women are from 23 different communities in Western Australia and the logical inference to draw from this is that to work together, they have to communicate, plan/organise & travel, and since ‘practice/artmaking practice’ as separate from ‘material practice’ involves the sum of everything the artist does to sustain and enable their work, which includes their ‘material practice’, then communicating, planning/organising & traveling is a characteristic of their artmaking practice. The second characteristic identified in the lesson was the use of traditional / natural materials, ( grass and raffia) and non traditional materials (discarded car frame). The third was ‘collaborative practice’ as differentiated by the work of an individual member of the group in Plate 2.

Other inferences and summations were;

Incidental information. This work won the Telstra Art Award 2005. On their website the work is titled “Tjanpi Toyota Dreaming” not the title given in the HSC paper. Materials quoted are raffia, grass, jute string, chicken wire and steel. The women are from 28 different communities not 23 as referenced in the paper.

In the HSC paper the failure to include ‘jute string and chicken wire’ in the listed materials would have left it to the inferencing ability of the candidate to make some assumptions as to how the rafia / grass was bound to the car frame and held in place in panel sections.

“Explain how Jeffrey Smart and Glen Murcutt have responded to the world around them in these artworks.”

“Smart painted this picture from a photograph he took of a railway station while traveling in country Victoria. A siding is a section of track off the main railway line. It is used for loading, unloading and storing trains”. 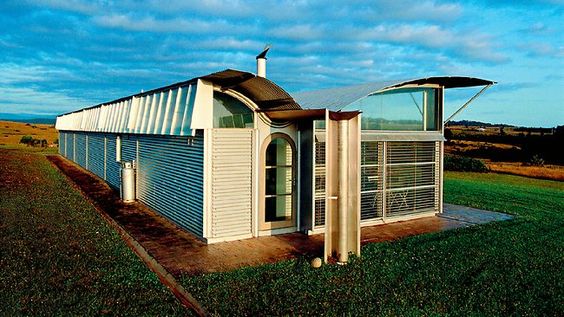 This house was commissioned by the Magney family to be built on the location of their favourite coastal camping site.

Some other points brought up in discussion were;

“Using the postmodern frame, analyse how Ah Xian and Barbara Kruger have revised and challenged traditional artmaking conventions. In your answer refer to Plates 5 to 8.” Source material: 4 plates and citations. Plate 5: Ah Xian, born 1960, China. He lives and works in Australia and China. China, China – bust No 10, 1998 This porcelain sculpture was cast from a human figure. The decoration was applied by ceramic workers in China Plate 6: Chinese vase from the Qing Dynasty 1662-1722 Glazed porcelain with cobalt blue decoration 33cm high

Plate 5 Image courtesy of NSW Board of studies

Key to answering this question is a comprehensive understanding of the Postmodern frame. Notions of appropriation, quotation, re-contextualization, irony, pastiche etc need to be referenced in the analysis of how Ah Xian and Barbara Kruger have revised and challenged traditional artmaking conventions. Crucial here is a working knowledge of what those artmaking conventions are, otherwise it will be difficult to see how these have been either revised or challenged. There are various arguments about the role of artistic conventions and whether they are or are not tempered by cultural considerations that influence interpretation and the transparency with which the artists intention is made clear. Conventions also influence the way audiences read artworks and this is one of the most likely areas challenged by these works. A more traditional reading of art conventions places it within structural aesthetics or the utilization of related principles or within genre structures, hence; the conventions of Landscape or Portraiture, etc. So let’s look at Ah Xian first.

Below the image of Ah Xian’s porcelain bust you are presented with an image of a Qing Dynasty vase with traditional motifs in cobalt blue. Ah Xian’s sculpture quotes and re-contextualizes these motifs and possibly the functionality of the vase. Arguably there were porcelain works from the same era as the vase that were purely decorative and non functional, so it would be a little difficult to argue that functionality is being challenged, so what is?

The porcelain cast of the head and shoulders of a Chinese national speaks more about what it is to be Chinese than anything else. The motifs sit like a tattoo on the skin, and here is where the first real challenge to the convention that influences the audiences reading takes place. The eyes are closed and the motif of the dragon covers the eyes, not seeing and not being seen. What is Ah Xian referencing?

The tattoo is difficult to remove, as is one’s cultural patterning and influence. It speaks more about the indelible nature of one’s cultural traditions. At the other end of the spectrum, the bust is part of Classical Western Art tradition and is not a mainstream practice in China, the bust could represent his own body or identity as an artist located in a Western Art tradition or environment indelibly imprinted with a cultural conditioning which he cannot escape. Class discussion revealed most of this, along with some interpretation of the motifs on the vase and what these meant in relation to the bust.

Other works from the China China series by Ah Xian 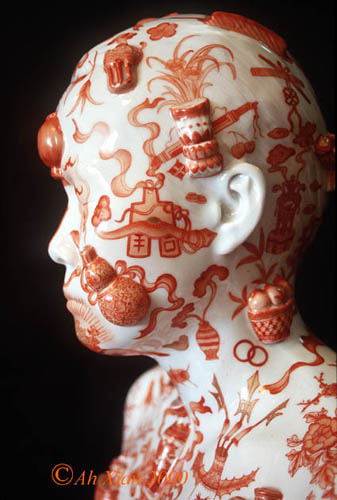 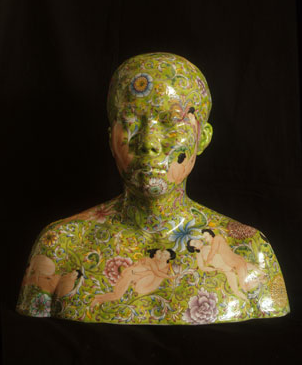 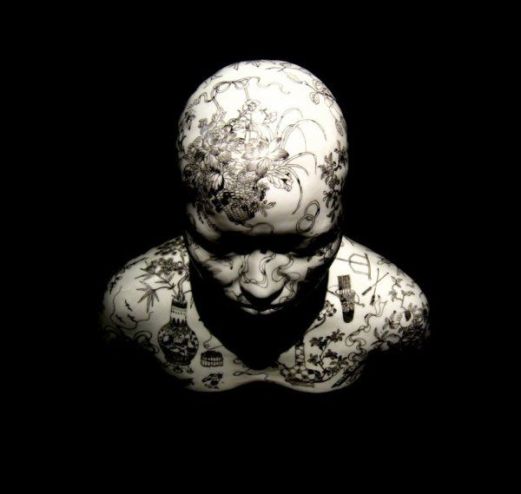 1999 Porcelain with under glaze blue and overglaze enamel images courtesy of http://www.artmolds.com/ali/halloffame/ah_xian.htm

Kruger’s quotation and re-contextualization of 17th century French philosopher Rene Descartes’ classic statement ,“I think therefore I am” (which has for centuries framed Western Civilization’s notion of human identity) was one of many successful works that thrust her into the limelight in the 1980’s.

Key characteristics of her works were identified as;

Of the two artists, Kruger is the easiest and most straightforward to deal with in the context of the question. Kruger; in these images, and in her body of work, has successfully challenged and revised the conventions that influence /determine the reading of artworks, which are part of artmaking conventions. In terms of the conventions of aesthetics she, like many before her, has had to use the traditional conventions of formalism / formalist aesthetic, which were taught to her as a designer, to challenge the way we see and interpret the function of art making.

In our discussion of the characteristics of her work in relation to the question, the following was drawn out..

The above do not belong to the conventions of traditional readings of artworks. The conventions that govern audience interpretation of images are primarily still related to aesthetics and the conventions of genres, (landscape, still life, portraiture, body and genre scenes) and because of this you can analyse these elements within the context of the question.

Whilst post modernity has struggled to subvert these conventions, on the whole it appears to have done little more than to revise or create new categories of conventions such as those that are the hallmarks of the movement. (it’s interesting that the things postmodernity once critiqued have now become conventions themselves). These artworks still have to have aesthetic credibility and visual presence and as such have to conform to the conventions of formalism / genre whilst remaining related to the artist practice and media use.

This site uses Akismet to reduce spam. Learn how your comment data is processed.